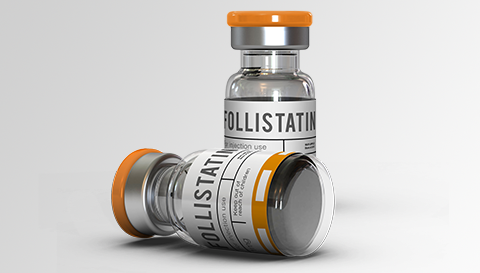 Follistatin 344 was originally identified as an inhibitory substance of follicle-stimulating hormone. Follistatin is a single-stranded gonand protein, which specifically inhibits the release of follicle-stimulating hormone. One FST gene encodes two isoforms, FST317 and FST344, containing respectively 317 and 344 amino acids, as a result of an alternative mRNA precursor compound. Follistatin binds directly to the activin and functions as an activator antagonist. Follistatin is a secreted protein that binds to TGF-beta family ligands and regulates their activity, preventing their access to signaling receptors.
Folistatin 344 is a protein with a high affinity for binding to activin and myostatin, whereby Follistatin can be called an inhibitor or blocker of proteins such as myostatin and activin. Myostatin is a muscle protein that keeps muscle growth under control. . Myostatin blockers deactivate the protein and its effect and thus cause a rapid increase in muscle mass. Follistatin is expressed in the pituitary gland, ovaries, decidual cells of the endometrium and in some other tissues. Recombinant human follistatin is a 37.8 kDa protein containing 344 amino acids.