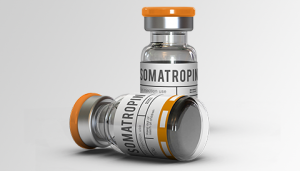 Recombinant growth hormone is identical in composition and effects to the pituitary hormone of human growth. It is a polypeptide comprising 191 amino acids. It stimulates the skeleton’s growth and transport of amino acids into the cell, accelerating the intracellular synthesis of the protein and thus showing an anabolic effect. It causes a delay in the body of nitrogen, mineral salts (calcium, phosphorus, sodium) and liquid. It also increases the level of glucose in the blood, body weight, muscle activity and physical endurance.

Somatropin activates low-density lipoprotein (LDL) receptors in the liver and changes the profile of lipids and lipoproteins in the blood. In general, the appointment of somatropin to patients with a deficiency of growth hormone leads to a decrease in blood levels of LDL and apolipoprotein B. There is also a decrease in cholesterol concentration.

Somatropin increases the release of insulin, but the fasting glucose concentration usually does not change. Children with hypopituitarism may develop fasting hypoglycemia. This condition is reversible upon administration of somatropin.

Deficiency of growth hormone is associated with a decrease in the plasma volume and extracellular fluid. The administration of somatropin leads to a rapid increase in both parameters. Somatropin promotes retention of sodium, potassium and phosphorus.

Long-term substitution therapy with somatropin leads to an increase in muscle strength and physical endurance. Cardiac output is also increased, although the mechanism of this action is not completely clear.

– Long-term treatment of children with growth retardation due to of insufficient endogenous growth hormone secretion;

– Substitution treatment in adults with an inadequate endogenous growth hormone, which occurred in childhood or adulthood.

Despite the multiple positive properties of Somatropin, such treatment can cause serious side effects, among which the following factors can be noted:

– Hypersensitivity to the somatropin or to any other component of the drug;

– Stimulation of growth for the patients with closed epiphyseal growth zones;

– Patients in critical condition in a result of open heart or abdominal surgery, with multiple trauma or acute respiratory failure.

Insufficiency of growth hormone must be confirmed as appropriate before treatment begins.

The maximum recommended daily dose of the drug should not be exceeded.

In adults with growth hormone deficiency, the diagnosis should be made according to the etiology: